You are here: Home / Environment / Dying and Revillaging 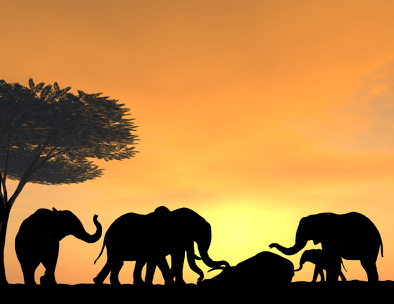 Crows know how to deal with their dying and dead.  When a crow dies, a call goes out and other crows come to mourn.  Elephants also have a compelling response when their kin dies.  Elephants have even been described as having “a fascination with death” (George Wittemyer, Colorado State University conservation biologist). According to a report by the New Scientist, dolphins and whales, along with chimps, gorillas and elephants, may experience “complex emotions once believed to be reserved for human beings: deep grief at the death of a loved one.”

This also applies to dolphins and to primates.  I especially love this line:  “While interpretations of animal behavior are always suspect to some degree… Gonzalvo’s [a researcher] interpretation is backed by at least one recent study on cetacean neurology which showed that dolphins and whales possess specialized, human-like ‘spindle’ neurons, which are the brain cells linked to empathy, grief and intuition in humans.”

So why would it be any surprise that we humans too are wired for empathy, grief and clan gatherings.

Irishman Kevin Toolis has come out with a new book documenting the dying and grieving rituals from his father’s small town in Ireland.  His explanation of the gathering and the villaging that happens is so touching.  In this short video, he so eloquently explains the jist of the dying and death journey and the way we can gather as humans in the face of the death and dying of our loved ones.

Watch his video. There’s not much more to say then. Other than, as Toolis himself tells us in the final chapter of his book:  “If you can find yourself a decent Irish Wake to go to, just turn up and copy what everyone else is doing…Take your kids along too if you can. Learning how to die is just a foreign language – the younger you start the easier it gets.”